on 1/1/2020 started the year with my first book. It had been on my reading list over an year, yes I have a reading list or rather collection of suggested books that I keep track of. My favourite reads have been mainly referrals from previous readers, apart from a few which either I stumble upon and get engrossed into like when I found the book.

Idling scouring my local bookshop for another title. From the preface it looked like a fantastic read, made me forget the original title I was there to look for.

For January my read was 12 Rules for Life: An Antidote to Chaos by Jordan Peterson, a suggestion I had gotten from an acquintance I met last year when swimming away in one of those rear occassions I found myself swimming. Pretending to be relax while still drowning myself literally on some title most presumably one of Yuval Noah Harari master pieces, fortunate enough to have read all the three published books he has, mind provoking material he has there.

Back to 12 Rules I was amazed by his simple articulate explanation of chaos, it’s exsistance being the fabric that necessitates order. With chaos brings order and vis versa situation of Egg or Hen story which came first scenario propostion, caveat my own jusxtapostion of his explanation. Which I am guilty of diluting bearly touching close to the explanation he gave. He picks a lot of anecdotes from various source but mainly from christian theology, based on the bible. Guess that meant that he would not avoid the whole creation story in the first chapter of Genesis, where from chaos came the world from God’s word.

As such the 12 Rules are not law but rather pointers and topical debates on matters social and personal, with one of the chapters being “Do not let your children do anything that makes you dislike them” what would you expect. I will save you the trouble of reading through the book but my picks were overtly:

A lot of the rules resounded to what I had read in The Four Agreements by Don Miguel Ruiz, emphasizing the philosophies I had gotten there. 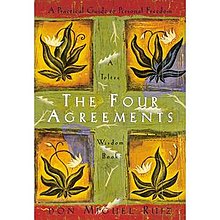 Am still torn between calling 12 Rules a personal motivation or just a guide thought provoking book? Guess I won’t be able to decide anytime soon. I would though suggest it as a read to anyone who fancies anecdotal stories from crabs and pecking order, to skate boarders and wanting dangerous thrills, to forcing and teaching kids obedeince and routine.